Juan Camilo Gaviria graduated in 1999 from The La Sabana University of Bogotá, Colombia, as an Agro-industrial engineer. After his graduation, Juan joined the Post harvest Rice Production program at the JICA in Tsukuba, Japan. In 2002 he graduated from the IDECESEM, Madrid – Spain, as Master in commercial direction and Marketing.

Juan was initially employed as a design engineer and commercial officer by Amandus Kahl in Hamburg – Germany and Madrid – Spain, where he was responsible for the technical sales and start-up of all kinds of machinery dedicated to feed milling and rice processing until 2004.

At Contegral (Colombian Fed mill), he was responsible for leading the feed manufacturing plants, including the design of new process expansions.

In 2007 Juan joined GaviAgro, his family company, working on the grain quality control (supplying equipment, technical services and people training) from Guatemala to Perú. From that time, Juan also has been part of the  SuperBrix team as a commercial VP, responsible for attending grain processing projects from their formulation to their start-up and after sales along the globe, where SuperBrix has sold machines and projects.

Juan has participated in several conferences and training courses, as a lecturer, always focused on grain processing and preservation. 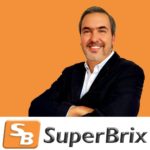